Hard gelatin capsules also known as hard-shell gelatin capsules or two-piece capsules are solid dosage forms in which one or more medicinal agents and/or inert materials are enclosed within a small shell. They are a well-established dosage form that provides solutions to many of today’s drug delivery and nutraceutical formulation challenges.

A hard gelatin capsule shell consists of two prefabricated, cylindrical sections (a cap and a body) each of which has one rounded, closed-end and one open end. The body has a slightly lower diameter than the cap and fits inside the cap.

Hard gelatin capsule shells are fabricated and supplied empty to the pharmaceutical industry by shell suppliers and are then filled in a separate operation. During the capsule filling unit operation, the body is filled with the drug substances and the shell is closed by bringing the body and the cap together.

Hard gelatin capsule shell is composed largely of gelatin. Other than gelatin, it may contain materials such as plasticizer, colourants, opacifying agents, and preservatives which either enable capsule formation or improve their performance. Hard gelatin capsules also contain 12–16% water, but the water content can vary, depending on the storage conditions.

Empty hard gelatin capsule shells come in a variety of sizes ranging from an arbitrary numbering of 000 to 5 with 000 being the largest size and 5 being the smallest. The shape has remained virtually unchanged since its invention except for the development of the self-locking capsule during the 1960s when automatic filling and packaging machines were introduced.

The size of hard gelatin capsule selected for use is determined by requirements of the formulation, including the dose of the active ingredient and the density and compaction characteristics of the drug and other components. The first step to estimating the optimal capsule size for a given product is to determine the density of the formulation using tapped density for powders and bulk density for pellets, minitablets, and granules.  The appropriate capsule size may then be calculated using the measured density of the formulation, the target fill weight, and capsule volume. The fill weight for liquids is calculated by multiplying the specific gravity of the liquid by the capsule body volume multiplied by 0.9.

Hard gelatin capsules are manufactured using a dip-coating method and the various stages involved are as follows:

Step 2:  Dip-coating the gelatin solution on to metal pins (moulds)

Step 3:  Rotation of the Dip-coated pins

Step 4: Drying of the gelatin-coated pins

The filling of hard gelatin capsules is an established technology, with equipment available ranging from that for very small-scale manual filling (e.g., Feton capsule filling machine), through intermediate-scale semi-automatic filling to large-scale fully automatic filling. Hard gelatin capsules can also be hand-filled one at a time, as done in a compounding pharmacy. The difference between the many methods available is the way in which the dose of material is measured into the capsule body.

The basic steps in filling hard gelatin capsules include:

Hard gelatin capsules can be filled by hand for research or experimental purposes or when filling a small number of capsules in the pharmacy. This is done by placing the powder to be filled on a sheet of clean paper or on a pill tile or porcelain plate and pressing the open end of the capsule downward until it is filled. The cap is then placed to close the capsule.

On a small-scale manufacture, hard gelatin capsules can be filled manually using a manual or a hand-operated capsule machine. This is done by directly filling the powder into the capsule shell and relying on the bulk/tapped density of the powder to get the correct dose for the volume of the capsule shell used.  The various types of hand-operated capsule machines have capacities ranging from 24 to 300 capsules and, when efficiently operated, are capable of producing about 200 to 2,000 capsules per hour.

Large scale production involves the use of machines that come in great variety of shapes and sizes, varying from semi- to fully automatic and ranging in output from 3000 to 150 000 per hour. Powder filling is accomplished by either of the two dosing devices: dosator device or dosing disk/tamping device.

The dosator device uses an empty tube that dips into powder bed, which is maintained at a height approximately two-fold greater than the desired length of the plug. The dosator piston’s forward movement helps form the plug, which is then transferred to the body of the capsule, and released. 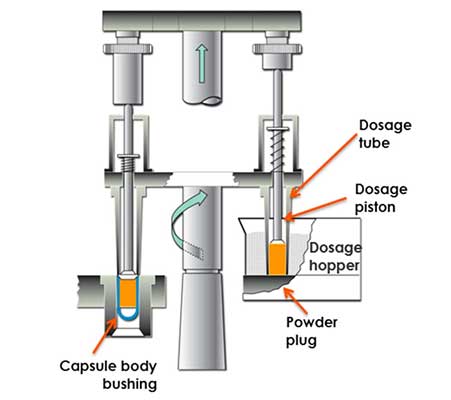 The tamping device operates by filling the cavities bored into the dosing disk, similar to the die-filling operation during tabletting. A tamping punch slightly compresses the filled powder by repeated action, which is followed by the ejection of the plug into the capsule body. 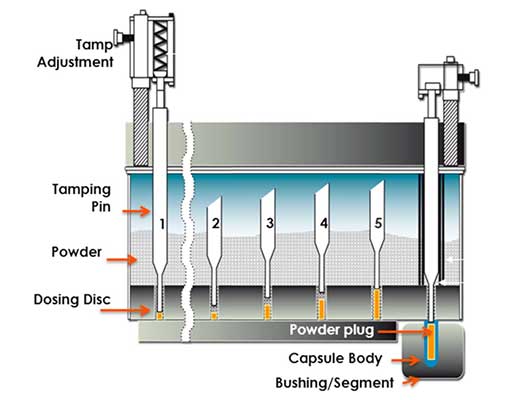 A more detailed discussion of capsule filling machines can be found in the article “Capsule Filling Machines (Encapsulators)”.

Tablets are placed in hoppers and allowed to fall down tubes, at the bottom of which is a gate device that will allow a set number of tablets to pass. These fall by gravity into the capsule bodies as they pass underneath the hopper. Most encapsulators used for this purpose have a mechanical probe that is inserted into the capsule to check that the correct number of tablets has been transferred.

Tablets for capsule filling are normally film-coated to prevent dust generation and are sized so that they can fall freely into the capsule body but without turning on their sides.

A recent innovation is the filling of coated minitablets, which have a significantly smaller surface area than the equivalent quantity of pellets, thus, reducing the amount of coating required and improving its uniformity.

Filling of multiparticulates and mini-tablets into hard gelatin capsules

Capsules formulated to give modified-release patterns are often filled with granules or coated pellets using machines adapted from powder use. These materials can be filled via volumetric filling and dosator filling using aspirational air ﬂow.

In the double-slide method, a chamber is opened and closed by a moving plate. A second plate then opens and closes at the bottom of the chamber to fill the metered pellet dose into the capsule. 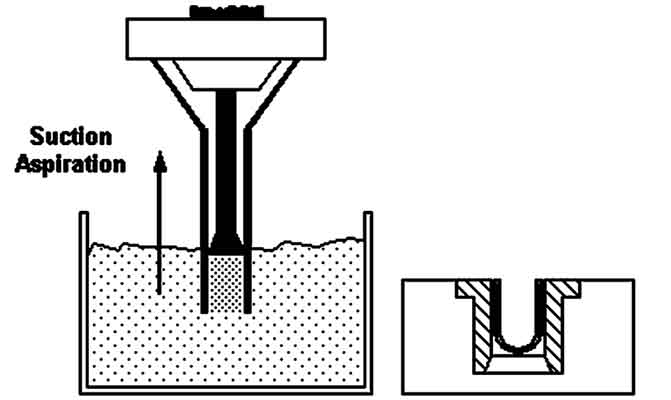 When the dosing disk moves the upper end closes und the dosing chamber moves directly above the capsule body to release the pellets. Filling of multiparticulates by dosator-type machines is achieved by the dosator driving into the pellet bed and sucking in the pellets by vacuum.

Because pellets are not compressed during the filling process, it is necessary to make an allowance for their size when calculating the weight of particles that can be filled into a capsule. Unlike powders, which have a much smaller size, pallets cannot fill as much of the available space within the capsule because of packing restrictions. The degree of this effect will be greater the smaller the capsule size and the larger the particle diameter.

As drug discovery continues to yield poorly water-soluble molecules, there is an increasing need for formulation techniques that can improve drug solubility. One such approach is the use of liquid-based formulations containing lipids, solvents, or surfactants, usually in combination, to improve drug solubility and bioavailability. The final formulation may be filled through piston pump systems into hard gelatin capsules as a room temperature liquid, or as a molten semisolid.

The filling of a liquid or semi-solid formulation is dependent on the viscoelastic properties of the formulation and the need to fulfil certain characteristics at the filling temperature. As a general rule, the formulation should have a viscosity of between 50 and 1000 Centipoise (cP) (although formulations of much higher viscosity can be suitable for manufacturing) and should not exceed 70 °C.

The particle size in suspension should ideally be less than 20 µm and formulations should be such that no stringing, dripping, splashes or solidification of the formulation should occur at the dosing nozzle. Unless a hot-melt is filled that completely solidifies below 40 °C, hard capsules are recommended to be band or fusion sealed using separate band sealing or Liquid Encapsulation Microspray Sealing (LEMS®) sealing equipment. For research purposes, a machine that is capable of filling and sealing 1500 capsules an hour (e.g. CFS® 1500) has been developed.

Note: If hard gelatin capsules cannot be used because of any formulation, preference, or cultural reason, alternative materials such as polymer-based shells or hypromellose may be used.