Tablets are solid drug delivery system prepared by compressing a single dose of one or more active drug substance(s) with some additives/ pharmaceutical excipients. They may be circular, oblong, oval, triangular or cylindrical in shape and flat-, round-, concave- or convex-faced with straight or bevelled edges.

In tablet formulation development and during manufacturing of tablet dosage forms, a number of quality control tests are performed to ensure that tablets produced meet the requirements as specified in official compendium and conventional requirements established by the industries over the years. These tests can be grouped into two broad categories namely:

They are called official tests because the test methods are described in official compendia such as the British Pharmacopoeia, American Pharmacopoeias etc. They are standardized test procedures which have clearly stated limits under which compressed tablets could be accepted. These tests include:

These tests are traditionally concerned with the content and the in vitro release of the active ingredient. It must be emphasized that what is presented here should by no means replace what are presented on each of the tests in official compendia.

This is determined from a sample of 20 tablets which should be randomly selected from a batch of tablets. The tablets are weighed together and are crushed in a mortar with a pestle.

An amount equivalent to the theoretical content of each tablet or the average of the crushed tablets is weighed out in an analytical balance. The weighed powder is dispersed in a solvent in which the active drug is freely soluble or in a solvent prescribed in the individual drug monograph.

This is filtered and an aliquot of the resultant filtrate is subjected to the stipulated assay procedures. The assay procedures are usually given in the individual drug monograph.

Analysis of the active drug is usually carried out using spectrophotometry or High-Performance Liquid Chromatography (HPLC). The formulation scientist must be familiar with Beer-Lambert’s law. This could be found in relevant analytical textbooks.

It must be emphasized that the results obtained here gives the average content of 20 tablets but does not give indication of the variation of drug content among the individual tablets. The limits of acceptance or rejection of tablets batches are usually presented in the individual drug monograph.

Coated tablets are exempted from these requirements but must conform to the test for content uniformity.

Uniformity of weight is a function of granulation quality, flow of granulation and machine performance. However, sometimes these ranges are not sufficiently narrow.

Content uniformity test was developed to ensure content consistency of active drug substances within a narrow range around the label claim in dosage units. This test is crucial for tablets having a drug content of less than 2 mg or when the active ingredient comprises less than 2% of the total tablet weight.

By the USP method, 30 tablets are randomly selected, 10 of these tablets are assayed individually according to the method described in the individual monograph. Unless otherwise stated in the monograph, the requirements for content uniformity are met if the amount of active ingredient in nine (9) of the ten (10) tablets lies within the range of 85% to 115% of the label claim. The tenth tablet may not contain less than 75% or more than 125% of the labelled drug content.

If one or more dosage units do not meet these criteria, the remaining 20 tablets are assayed individually and none may fall outside of the 85% to 115% range for the batch to be accepted.

Various factors are responsible for the variable content uniformity in tablets. This may include:

For tablets, the first important step towards drug dissolution is breakdown of the tablets into granules or primary powder particles, a process known as disintegration. All USP tablets must pass a test for disintegration, which is conducted in vitro using a disintegration test apparatus.

During testing, a tablet is placed in each of the six tubes of the basket, and through the use of a mechanical device, the basket is raised and lowered in a bath of fluid (e.g. water, or as prescribed in the individual drug monograph) at 29 to 32 cycles per minute, the wire screen always below the level of the fluid. For most normal release tablets, the time permitted is 15 minutes.

Tablets are said to have disintegrated if no fragments (other than fragments of coating) remains on the screen, or if particles remain, they are soft without an unwetted core. Chewable tablets are not required to comply with the test. 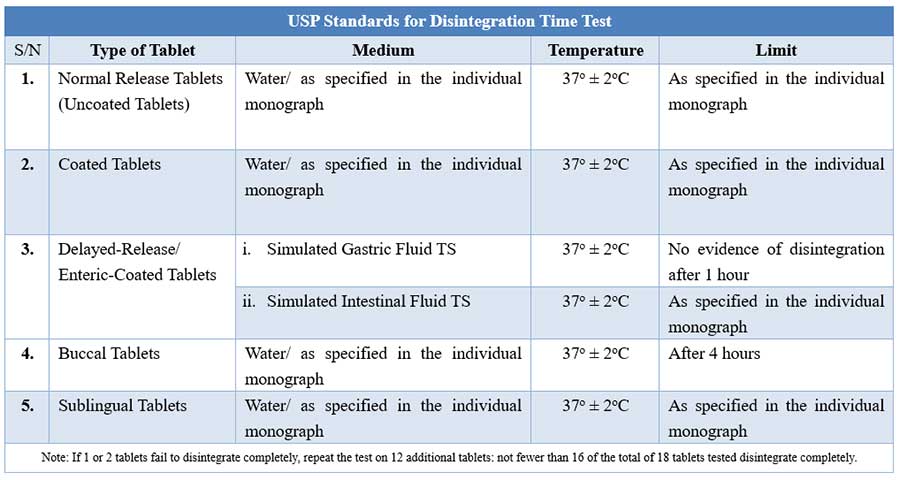 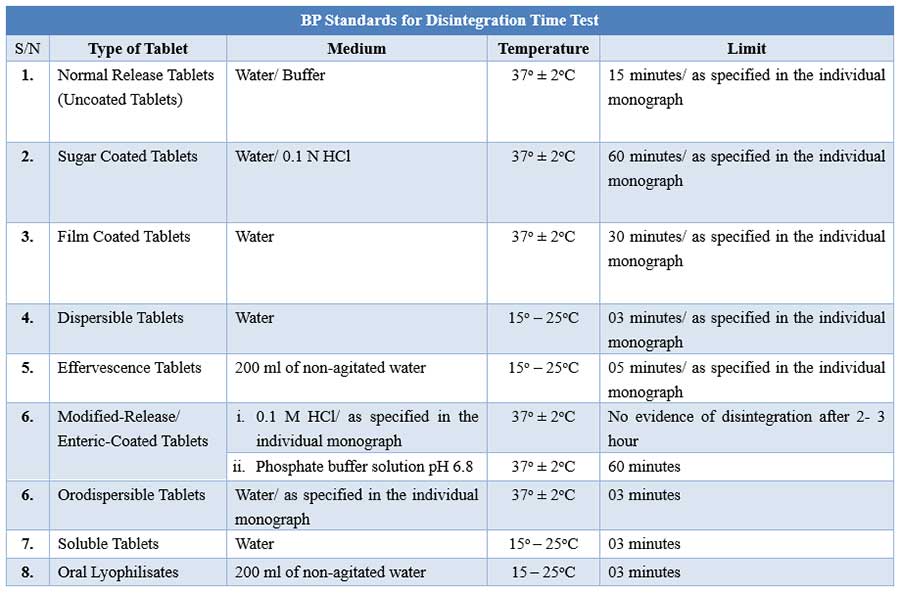 Research has established that one should not automatically expect a correlation between disintegration and dissolution. However, since the dissolution of drug from the fragmented tablet appears to control partially or completely the appearance the drug in the systemic circulation, disintegration is still used as a guide by the formulator in the preparation of an optimum tablet formula and as an in-process control test to ensure batch to batch uniformity.

Factors affecting disintegration of tablets include:

Elixir for Sourcing of Candidates and Retaining Them