The conventional coating pan system consists of a spherical, hexagonal. or pear-shaped pan that rotates on an inclined axis. The rotational movement of the pan causes the substrates to tumble and make multiple passes through the spray application zone. Heat is blown across the surface of the tumbling tablets and exhaust air is withdrawn. 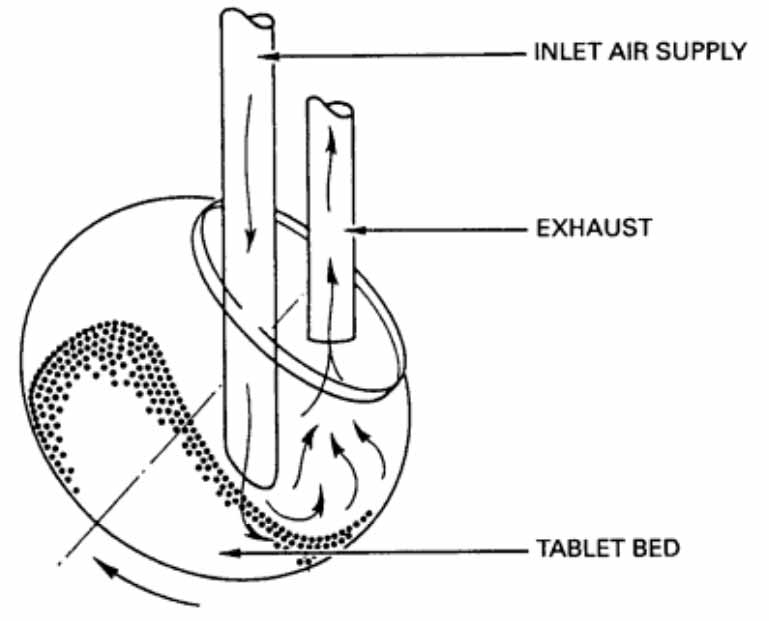 The use of conventional coating pan in film coating processes is faced with three major drawbacks;

Since the conventional pan was in common usage at the time film coating was introduced, this type of equipment initially formed the basis for the film-coating process, with lack of drying efficiency being offset by use of highly volatile organic solvents. A number of modifications were made to the design of the hot air handling equipment to accommodate the aqueous process. Typical examples of such modifications include the design of conventional coating pans with

Perforated coating pan consists of a perforated or partially perforated drum that rotates on its horizontal axis in an enclosed housing. The equipment was developed to maximize the interaction between the tablet bed and the drying air, which it does by drawing the air through the tumbling product bed as opposed to supplying air to the bed surface only. This was important to the development of aqueous fi­lm coating due to the relative high latent heat of vaporization of water (539 kcal/kg), which is much greater than that of the then popularly used organic solvents (e.g., 200 kcal/kg for ethanol).

The perforated coating pan has surfaced as the design of choice in most film-coating applications (the major exception being for the film coating of particles such as beads, pellets, and powders unless modifi­ed with a mesh insert). Mixing efficiency is achieved by the use of appropriately designed baffles on the pan surface.

The ﬂuidized bed equipment offers an alternative to pan coating and is particularly popular for coating multiparticulate systems. The equipment offers the potential advantage of being able to affect the most efficient drying of any product that is possible in any existing coating equipment.

In a fluid bed system, the objects being coated are suspended in an upward stream of air, maximizing the surface available for coating. The coating is applied by an atomizer, and this is dried by the fluidizing air.

Film coating can be applied to the ﬂuidized material by a variety of techniques – top spray, bottom spray and tangential spray. The selection of a particular technique is often determined by the nature and intended functionality of the coating applied; for example 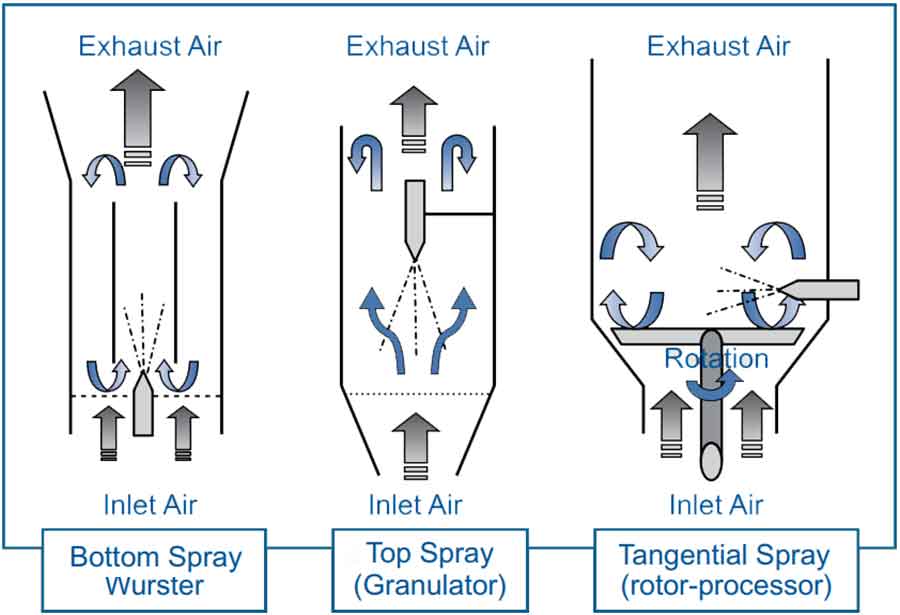 While sugar coasting operations can be accomplished using manual ladling procedures, success of the film coating process rests on the availability of coating equipment with spray atomization system which allows coating liquids to be applied in a much more controlled and reproducible manner. There are basically two types of spray-atomization systems available;

In this type of system, the coating solution is pumped at high pressure (250 – 3000 psig) through a spray nozzle with a small orifice. Atomization of the liquid occurs as it expands rapidly on emerging from the nozzle. Because of high delivery rates, this system is typically used in large-scale film-coating operations where organic-solvent-based coating liquids are to be applied. The degree of atomization achieved by this system depends on:

Here, the coating solution is pumped, under little or no pressure, to the nozzle and is subsequently atomized by means of a blast of compressed air that makes contact with the stream of liquid as it passes from the nozzle aperture. This system is typically more effective in small-scale coating processes and all those involving aqueous-film coating operations. The major drawback of this system is that the atomizing air can give rise to premature spray drying of solution droplets resulting in non-glossy porous film being formed. The degree of atomization achieved by this system depends on:

The choice of spray application system for a coating process depends on coating solution formula and on the process developed for a particular product.

Coated solids are generally evaluated visually to detect defects in the film. Some defects may be aesthetic in nature, while others are more serious and may compromise the functionality of the coat. Manipulating processing conditions, adjusting the coating formulation, or reformulating the substrate may resolve the problems. Some common problems encountered in film coating include:

Advantages and Disadvantages of Film Coating