Film coating is a contemporary and widely used process for coating oral solid dosage forms in the pharmaceutical industry. It is a process that draws on technologies associated with polymer chemistry, industrial adhesives and paints, and chemical engineering.

The process of film coating involves the deposition of a thin, but uniform polymer-based formulations onto the surface of solid dosage forms such as tablets, capsules, powders, granules, or pallets under conditions that permit:

The function of the coating may be to improve esthetics, mask unpleasant taste and odour, separate incompatible materials, or modify drug release profile.

The film coating process of today was introduced in the early 1950s as an improvement on the traditional sugar-coating process. The process has proved successful as a result of the many advantages offered, including but not limited to:

In spite of these advantages, there are still some areas of concern in the film coating processes and operations. These concerns arise from the fact that most solvents used in film coating formulation can cause health and environmental hazards. Fortunately, significant advancement in process technology and equipment design, have facilitated the introduction of aqueous-based coating formulations. The result is that less volatile, and safer, solvents such as water can be easily accommodated by the process.

Film coating involves the deposition of a thin layer of film-forming polymeric onto a product substrate. The process can be carried out using conventional panning equipment but nowadays more sophisticated equipment is used to achieve efficient drying, high degree of automation and coating time.

The coating formulation contains a polymer solubilized in a suitable solvent together with other additives like plasticizers and pigments. This solution is sprayed onto a rotating or fluidized tablet bed. The drying conditions cause removal of the solvent, leaving a thin deposit of coating material around each tablet core.

Schematic representation of the film-coating process

Immediate-release film coatings also known as non-functional or conventional film coatings are typically reserved for situations in which it is necessary to improve product appearance, ease of swallowing, product stability, and for taste masking. The coatings have no measurable effect on biopharmaceutical properties of the coated dosage forms.

Polymers are substances whose molecules have high molar masses and are composed of many repeated subunits. They are formed by chemical reactions in which a large number of molecules called monomers are joined sequentially, forming a chain.

In the majority of film-coating formulations, the polymer is the major component in the coating solution. Consequently, this material will have the greatest impact on the final properties of the coating. Some of the key attributes that the film-coating polymer must possess include:

Polymers used in film coating fall into the following categories. 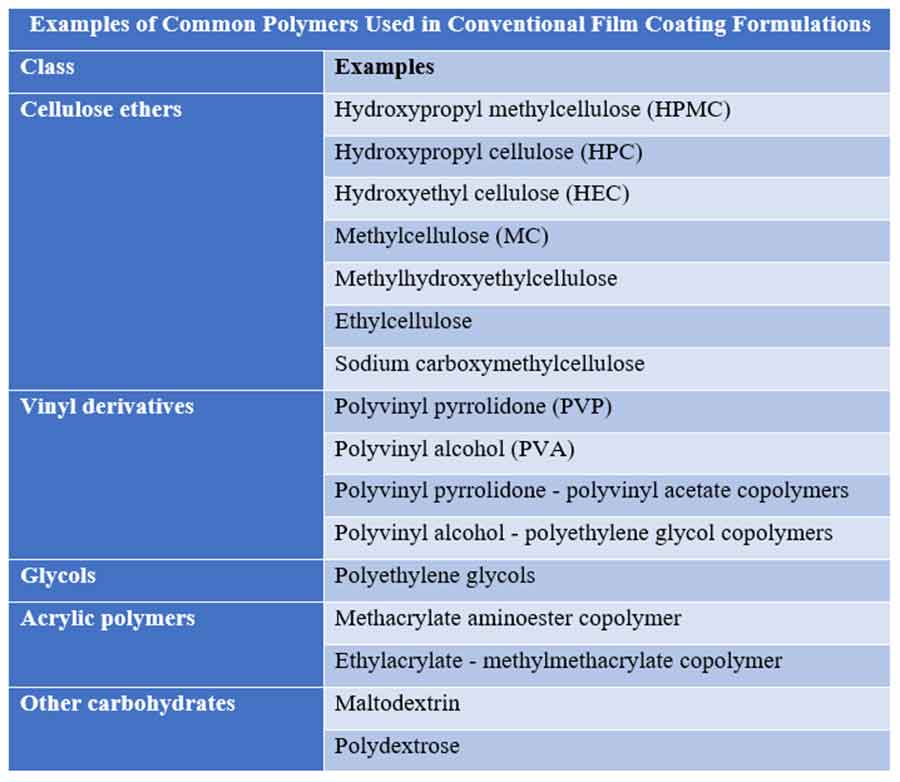 Plasticizers are relatively low molecular weight materials which are added to film-coating formulations to modify the physical properties of polymers. This is necessary because most acceptable film-coating polymers are essentially amorphous, and as such, exhibit a reasonably well-defined glass transition temperature, Tg (a fundamental characteristic of polymers that has a profound effect on polymer properties that can also influence film formation, especially when using aqueous polymer dispersions).

Plasticizers act by weakening intermolecular attraction between polymer chains and facilitating coalescence of discrete polymer spheres of aqueous dispersed systems during ﬁlm formation. This reaction results in increased film flexibility and reduced residual stresses within the coating as it shrinks around the core during drying.

Examples of plasticizers commonly used in film coating processes include:

Colourants are included in many film-coating formulations to: 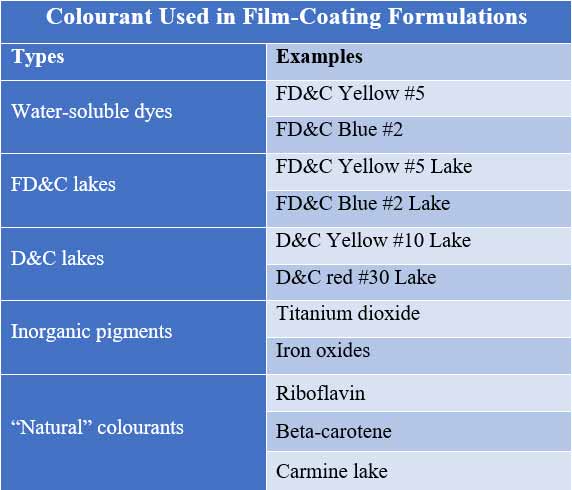 As with sugar coating colours, film-coating colourants must comply with regulations promulgated by the national legislation of the country where the products are to be marketed.

Effects of Pigments on the Properties of Film Coatings

Solvents are used to dissolve or disperse coating materials and convey them to the surface of the tablet core. Initially, film-coating processes were very much dependent on the use of organic solvents in order to achieve the rapid drying characteristics demanded by the process. Unfortunately, concerns with operator’s safety, environmental, and cost-related issues have provided the momentum for the current utilization of aqueous-based film coating as the preferred option. However, the use of solvents has continued, especially when: 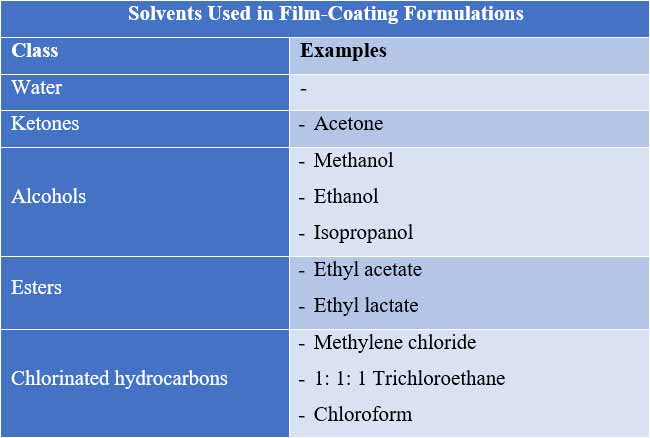 While polymers, plasticizers, colourants, and solvents constitute the major ingredients in film-coating formulations, other materials might be used occasionally in low concentrations for specific formulations.

Flavours and sweeteners may be added to mask unpleasant odour of some drugs or to make them more palatable.

All ingredients used in film-coating formulations must comply with the relevant regulatory and pharmacopoeial requirements current in the intended marketing area.

Advantages and Disadvantages of Film Coating